- Posted using BlogPress from my iPhone

I am getting ready to go for a run at the lake and the sky still looks like this...,

Actually it is much lighter than this but you get the idea. It's a quarter to 6:00 and it is still solidly daylight. Woo-hoo!!!

Spring must be just around the corner.

Posted using BlogPress from my iPhone

It's A Marvelous Night For A Poop Dance*

Sloths have a poop dance!!  Look at their blissed out little faces! This might be one of the cutest things ever.

*my apologies to Van Morrison
Posted by Titanium Spork at 10:24 AM No comments:

I am always proud to be a native Washingtonian and I don't know that I have ever been prouder than I am right now.  Washington has joined the ranks of the few states that have signed a marriage equality law into effect.  I only wish we had done it sooner and been more of a leader.

I am also proud to say our Governor Gregoire hails from my alma mater, Auburn High School.  Go Gregoire!  Go Trojans!  That's the most excited I have ever been for my former school.

Now, let's just hope when the signatures come in and this law gets suspended and forced to a ballot issue this fall that the people of this great state do the right thing and fall on the right side of history.
Posted by Titanium Spork at 12:47 PM No comments:

The great plans to accomplish lots of little projects around the house got blown out of the water this weekend.  The week before was packed with stuff every night so rest and relaxation took precedence.  We did manage to see PNB's Don Quixote (fabulous) on Friday night and this afternoon we met my friend Todd at EMP for a Battlestar Gallactica and horror movie exhibit.  The rest of the time?  Sleeping, sorting papers and catching up on Downtown Abbey while Kevin made Tikka Masala (he insisted, shooed me out of the kitchen and everything.  It was awesome).  I admit though, I could use one more day of rest before heading back to the grind tomorrow. 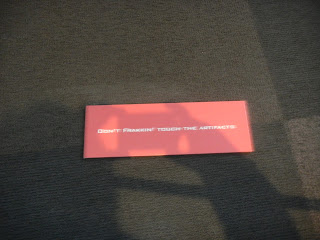 It was too dark for any of my BSG pictures to turn out but this one of the sign warning us "don't frakkin' touch the artifacts" sort of did.  I wanted to steal one of these for my office.  Sadly, there were no Cylons, old or new, just a really cool new Cylon raider model.  There was nothing from Dirk Benedict, my first crush, either.
Oh, and one of the things that kept me busy after work was a few hours in the salon going for a new look. 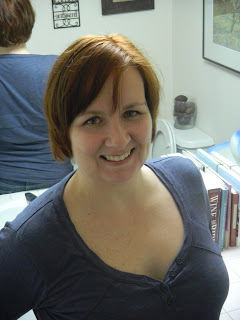 It needs to lighten up a bit but I am enjoying it right now and think I will keep it this way for awhile.  Also, my hairdresser told me that it would take multiple visits to turn me blonde again.  I am also decreeing that all future pictures of me need to be taken from about two feet above my head because it makes the jowls look better and my boobs look huge.
I hope you had a productive or restful or productive and restful weekend.
Posted by Titanium Spork at 9:43 PM 2 comments:

Running Through the States

On my trip back east I decided to set a new life goal for myself:  to run in all 50 states.  I meant to get all four of the states we visited checked off on this trip but where we were in Maryland was horrible for running (zero shoulder and no sidewalks) and I was just too dang tired the morning we were in Pennsylvania.  Next trip for those.  However, I did manage to get a run in while we were in Charlottesville, VA and in New York.  I don't run with a phone or a camera so these pictures are things I saw on my run that we walked by later the same day.  I might have to change that rule for future 50 state runs.

First I give you beautiful, historic Charlottesville. 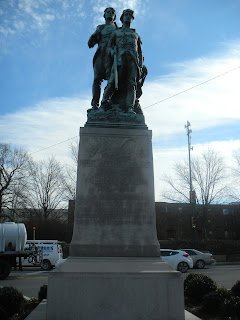 A little Lewis and Clark statue in a roundabout.  I almost didn't recognize them because anywhere else you see them one of them is pointing off in the distance.  Since the initial plan for the expedition began here in Charlottesville it seems a fitting statue.  Couldn't figure out if they were facing west or not, I sure hope they were. 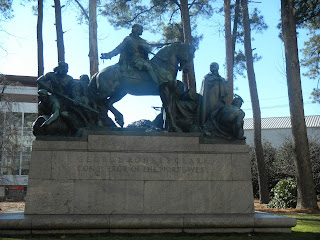 This one stopped me dead in my tracks.  "Conqueror of the Northwest?"  WTF?  I started to get all indignant and filled with regional pride.  I'm from the Northwest and I never heard of George Rogers Clark conquering anything to do with us you motherfu......oh, wait.  When George Clark (William Clark's big brother) lived, the Northwest was probably Kentucky or Ohio.  I slunk away from the statue feeling a little silly. 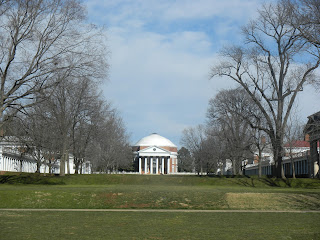 The turn around point on my run was the University of Virginia grounds (I was told by a local that it is never "the campus" but is always "the grounds").  This has to be the prettiest campus in all of America.  No, I haven't been on them all but I will still place that bet.  The place was designed by Thomas Jefferson and this main area is just stunning.  All different styles of architecture are represented here in this rectangle (known as The Lawn) but it all flows together beautifully.  The low slung buildings flanking the picture are actually dorm rooms of some of the fourth years (Jefferson hated the terms freshman, sophomore, etc.).  Can you imagine living in one of these rooms that were part of Jefferson's original design for an academic village?  Lucky kids that go here.

The run itself was about 3.5 miles and it took me from our beyond charming 120 year-old inn through the town, past all the college kids streaming into class (the official outfit of the UVA female is the tight jeans with knee-high riding boots in case you were wondering), through the grounds to the end of the lawn and back home again.  It was a gorgeous clear day and one of the best runs I have had in a very long time.

When we were in New York I got up early to squeeze my run in.  I was worried we wouldn't have enough time but Kevin encouraged me to get out there and do it because he knows how much I love doing this.  Sure enough, I came back practically giddy from this run.  I was grinning like an idiot and was completely energized.  Great run through a truly great city.

I started from our hotel in Times Square and ran up Sixth Avenue towards Central Park.  It wasn't too crowded and I only had to dodge people a little bit.  The stoplights were a little annoying but since my fitness isn't great I didn't mind the stops.  Besides I got to check out all the cool New York stuff like Radio City Music Hall, NBC studios, the LOVE statue and so many more.  I entered Central Park on the south side and just started following paths.  As I ran past the partially frozen pond, I thought about Holden Caulfield and the ducks he worried about when the pond froze over.  I ran past an ice skating rink and through the beautiful, rocky landscape.  I wish I took some pictures later of some of the pretty rock outcroppings.

I spotted this and fell in love with it. 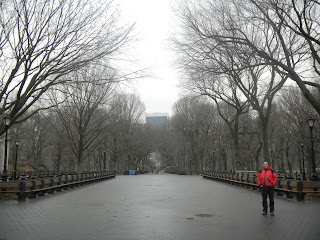 This is the mall and when you run it facing the other direction like I did you see the Bethesda Fountain at the end.  The picture doesn't do it justice.  The trees reaching over to create an archway across the path are so beautiful and welcoming.  I kept imagining it through all the seasons. 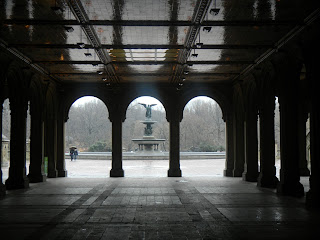 This is the Bethesda Fountain viewed through a bath house type thing whose name escapes me.  I ran to the back of the fountain and realized I had been gone for longer than I expected so I turned around and headed back downtown to our hotel. 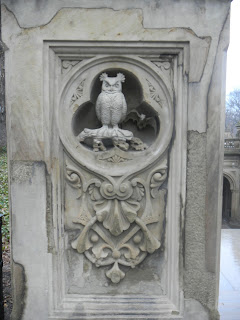 This is a detail of one of the end walls leading down to the fountain.  There were carvings and statues everywhere you turned.  I loved Central Park from the minute I stepped foot in it.  I can't wait to come back and run it again and again and again.  Next time I will be in better shape and have more time so I can go further into the park and see more.

The total mileage on this run was about four miles.  I couldn't pick up a Garmin signal until I got to the park because of all the skyscrapers so I had to estimate a little.

So far I have ran in seven states:  Washington, Oregon, California, Nevada, Utah, Virginia and New York.  I am looking forward to completing my list.  Yes, even New Jersey.
Posted by Titanium Spork at 8:25 PM 2 comments: