The past few weeks have been a whirlwind. Between Kevin's birthday weekend getaway, cleaning the disorganized and filthy house for Thanksgiving, shopping/prepping/cooking for Thanksgiving, and That Which Shall Not Be Named it has been a little crazy.

Kevin's birthday was great. We went to McMenamin's Grand Lodge and had a great time relaxing, wine tasting, and playing disc golf. Kevin turned 40 with very minimal amounts of weeping and wailing. 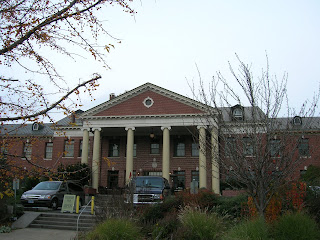 Here is the Grand Lodge and the birthday boy posing by a sign in the basement. 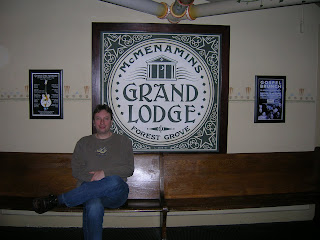 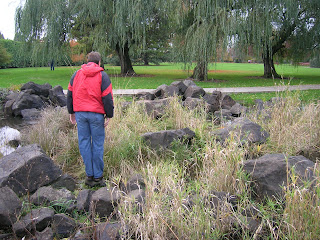 This is Kevin gallantly trying to find my bright orange "Frisbee" that I lost in the water feature. Charlie Brown had his kite eating tree; I have my Frisbee sucking pond. We never did find the dang thing and I ended up having to buy one to finish the game. I lost by the one penalty point I incurred by hitting the water feature. Aaarrrgh!
We hosted Thanksgiving this year for my family and our friend J.B. All together there were nine of us but apparently I can't count that high and until my brother pointed out the number of people as we were getting ready to sit down at the table I had no idea. Luckily, we had one extra plate and a metal folding chair so I had a place to sit and eat. Just as we were sitting down to eat, Ollie decided that now would be a perfect time to go on a very vocal, very lengthy "date" with his favorite cat toy. We were serenaded by the sounds of neutered cat attempted fornication while we ate our dinner. Kind of the highlight of the day I would say (for us and for Ollie). Other than a failure to turn on a crockpot, the dinner came off OK. I am always super-hard on myself so I didn't think the food was particularly good but people seemed to enjoy it and enjoy the day which, in the end, is what really matters. I am, however, on the lookout for a good stuffing recipe. Send them my way.
These are the fabulous turkey napkin holders that Kevin made for the occasion. Many hours were spent with the scroll saw to create eight of these little guys. 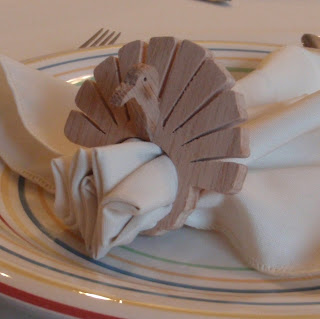 I hope you all enjoyed your holiday. Thanksgiving has always just been a road bump on the path to Christmas for me so I am (almost) ready to get down to the serious holiday-ing.
Posted by Titanium Spork at 10:34 PM No comments:

Nothing cohesive enough to put into a regular posting so bring on the bullet points!

Happy early weekend to all.

Posted by Titanium Spork at 8:53 AM No comments:

If Only I Believed in Hell...

This is my last school related rant. I swear.

There is an Oscar Wilde quote that goes something like: "Other people are quite dreadful. The only possible society is oneself." While I don't necessarily agree with that statement, there are times when I agree a little too much. There are times, Lord knows, there are times. Let's take last week for example.

Last week we had our first group paper and presentation due in my Strategic Management class. In addition to writing one of the five sections, I agreed to proofread, edit and format the dang thing and one of the other group members would work on the slides for our presentation. Both items were due Thursday at 3:00. I got three people's "final revisions" at 8:00 p.m., 9:30 p.m. and 9:50 p.m. THE NIGHT BEFORE. Not only did I not get these in what I consider to be a timely fashion, two of the three sections were riddled with spelling and grammar errors and one had no citations at all. Some of the errors were even caught by spellcheck and were underlined in red but the person was too damn lazy to even correct those. That is how little they proofread their own work. I didn't expect to have to be going through these things fixing large blatant errors at the very last minute. I was up until 1:00 a.m. and finally just had to give in and go to bed since I had to be up at 6:00.

The presentation? Yeah, I didn't see rough copies of the slides until 10:30 THE NIGHT BEFORE the presentation. I would rather have more chunks taken out of my boobs then do a presentation anyway and this just made it oh so much better. Since I was up until 1:00 a.m. editing, formatting and cursing people I didn't get a chance to pull together notes on what I was supposed to say the next day. Luckily, I have a really understanding boss who let me punch out early, sit in my office with the door closed and work on what I was going to say so I didn't entirely embarrass myself.

In some ways I am envious of the people who clearly don't spend the time sweating things like deadlines, quality work or leaving your team members in the lurch. But then I realize that being an inconsiderate, self-absorbed, douche nozzle isn't really something I'm interested in becoming.

Four more weeks and one more group paper with these people. Guess who won't be volunteering to pull together the paper?
Posted by Titanium Spork at 9:24 PM 1 comment: